Vente-Privée: Still Losing the Popularity Contest in the U.S.

Founded in France by Jacques-Antoine Granjon in 2001, Vente-Privée originated the flash sales model in Europe long before it was popular in the United States.  Mr. Granjon’s company recently entered the U.S. market in 2011; long after other competitors had grabbed major footholds.

Flash sales were first introduced to the US market in 2007 during the financial downturn. Ideeli was first on the scene launching in the spring of 2007, and was then quickly followed by RueLaLa, Hautelook, and Gilt. These flash sales sites were originally focused on high-fashion items for men and women, but they have now branched out to other categories, including wine, travel, kids clothes, and home furnishings. Numerous other flash sales sites have also launched that are singularly focused on one category (e.g. One Kings Lane, Lot18, Totsy, etc.). As I mentioned in a previous post, Business Insider estimates that flash sales in the U.S. will grow from a $1.5Bil market in 2011 to a $6Bil market by 2015. Obviously, Vente-Privée would have been foolish to sit on the sidelines in Europe during the rapid expansion of the U.S. market.

When entering the U.S. market in 2011, Vente-Privée partnered with American Express, and to Mr. Granjon’s credit, he has admitted that it will take time for Vente-Privée to build up its presence in the United States. Prior to the launch, Mr. Granjon was quoted by Business Insider as saying “This is the US. There’s tons of competition, there’s an entrepreneur everywhere, there’s always someone who can do what you do better and cheaper. We have to be very humble. But our goal isn’t to flip this in two years. Our goal is to build something big over the long term.” Granjon was also quoted by DirectorsOf.com as saying “…I want to continue growing…but it is not the main purpose. For me the main purpose is quality of service and having a good offering.”

Although Granjon isn’t focused solely on growth, I can’t imagine he expected the company to grow this slow in the States. As the below chart shows, Vente-Privée is losing the popularity contest by a long shot. 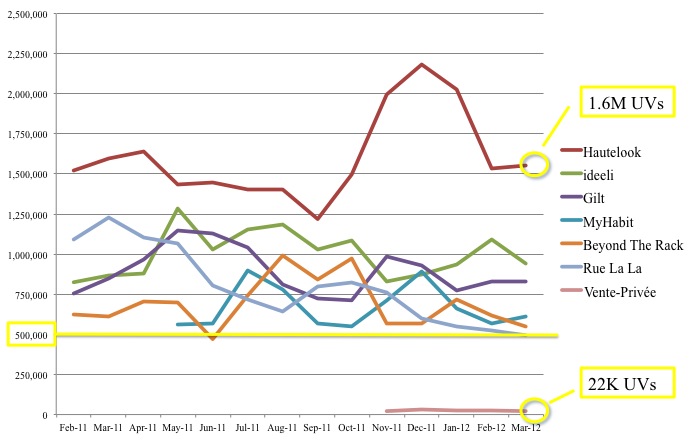 The above chart measures popularity based on unique visitors. This metric doesn’t say anything about the company’s conversion rate or current membership, but as the chart shows, Vente-Privée is only attracting 22k unique visitors a month. This pales in comparison to its six leading direct competitors, who all attracted over 500k UVs. Obviously, using unique visitors as a metric has its flaws, but it is interesting to note how few visitors Vente-Privée is getting on a monthly basis. Ultimately, it is impossible to convert visitors that don’t come to your site.